Matthias Manasi, Music Director of the NCO in Buffalo, NY, USA will be leaving the NCO in July 2021.

Surprising news from the international classical music scene: Matthias Manasi, Music Director of the Nickel City Opera in Buffalo, NY, USA will be leaving the NCO in July 2021.

Matthias Manasi will not extend his collaboration as Music Director of the NCO. In July 2021 he plans to leave the Nickel City Opera in order to focus more on his international commitments and his duties as chief conductor of the orchestra ‘I Solisti di Milano’ in Milan, Italy.

Since 2017, when Matthias Manasi led a breathtaking production of Mozart’s ‘The Impresario’, he has been in charge of the musical fortunes of the Nickel City Opera in Buffalo (NY) and is now ending his successful four-year collaboration there with the 2020/21 season.

Maestro Manasi has often been praised for his organic understanding of music, the rhythmic power of his renditions, his transparent sound in his opera productions and for his psychological comprehension of the libretto and the opera”s dramatic expression. The musical critics often wrote about the intense passion, spontaneity and the energetic temperament of his performances. His energy and skills have won him many friends in Buffalo.

In the coming seasons, Manasi will focus on CD recordings, opera premieres and concerts with international orchestras. 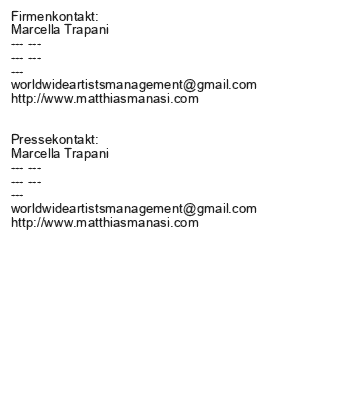